In 1974, Congress commissioned a study of how to mitigate the hardships of the 1973 Oil Embargo and traffic problems in America. “Automated Guideway Transit”, study PB-244854 was published by the Congressional Office of Technology Assessment (COTA) in 1975.

The study had two major findings:

This failure stems from a lack of understanding by UMTA [responsible Federal agency] of the capabilities of the private sector and local transportation authorities and UMTA’S underestimation of the difficulties inherent in developing and implementing reliable and cost effective new systems.

US Senate Letter on the importance of implementing podcar networks (enlarge): 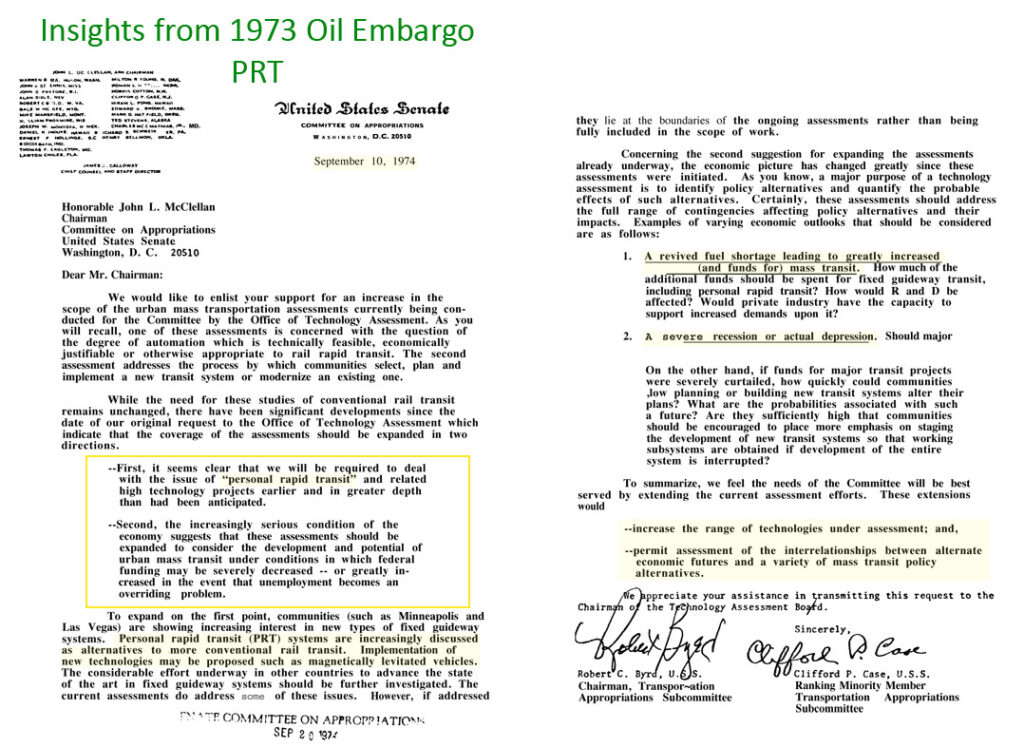 Pirates and Partriots. By purposefully violating every law that gets in their way:

Lesson from the Internet

Under Federal regulators, there was nearly a century of rotary telephones.

The technology existed for the Internet for decades before it commercialized. Link to the history of the Internet and the Prime Law of Networks. As examples, in 1941 the technology for WiFi and Bluetooth was patented. In 1968 nearly every aspect of modern computing and the Internet were demonstrated in “The Mother of All Demos“.

The Boston Tea Party was a demonstration against a government transportation monopoly that triggered a war. To preempt rebuilding that path to war, the “post Roads” and “Ports” restrictions were voted into the Constitution on Sept 14, 1787 forbidding Federal taxing and building highways and canals beyond what was required to defend free speech. The US Constitution is an enumerated powers document. Powers not enumerate are forbidden.

Climate Change, perpetual oil wars since 1991, oil-dollar funded terrorist attack on America, and $23 trillion in Federal debt buying foreign oil and fighting oil wars are violations of the Preamble, Necessary and Proper, and Commerce Clauses. These clauses are restated in Amendments 9 and 10 of the Bill of Rights.

Following is an example of a simple, standard-based approach that will allow free markets to innovate sustainable transportation networks. It is written relative to Georia:

THEREFORE, BE IT RESOLVED,

Links to References by State for: